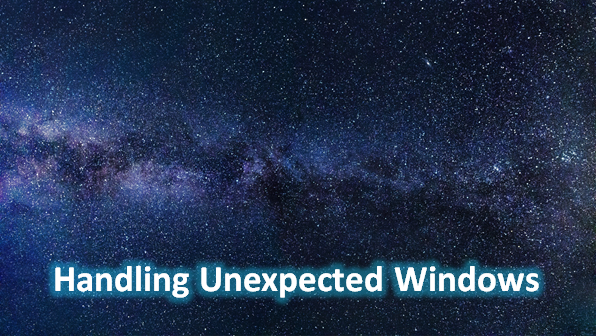 When you are designing your script and you know that a specific popup will appear on a particular event then you design your script in that way. You handle that using assertions something like below

But what if, when you are not aware of a popup window which appears suddenly due to an issue/bug/change in functionality. This could be due to many reasons. e.g. you are working on a printer dialog box and the window popup occurs as ‘printer out of paper”, which is an unexpected window.

The way TestComplete handles this situation, is in following sequence

1. Script execution is delayed until expiration of the “Auto-wait timeout” interval set in the project property, playback section.

2. If the unexpected window is still open, TestComplete generates the “OnUnexpectedWindow” event. You can use this event to perform required action when an unexpected window appears. The event has the following parameters:

Sender: The Event control that processes the event.

Window: Specifies an unexpected window as a Window object.

LogParams: Properties of the LogParams object hold text, priority, color and other attributes of the error message posted to the log.

below is a simple example, which takes the screenshot and changes the message, when an unexpected window appears.

This event can be added to by adding ‘Events’ to your project.

3. If the window is not closed by the OnUnexpectedWindow event handler, TestComplete posts an error message to the log along with an image of the unexpected window and then acts according to the Playback settings:

Otherwise, any of the four following actions is taken, depending on the settings in the Unexpected window section:

TestComplete 12 has been released